Hey everybody! Sorry it's taken so long to get this up - I was really tired yesterday and today some friends and I went out to the park because it was super nice out. I wanted Jenna to come, but she's still not been responding to my texts very often (last I heard from her was on Sunday. I'm kinda worried but I don't want to be overbearing) Oh well. To the lesson!


Today's lesson is fairly simple. Last semester, when it came to open ended projects, I noticed a trend. I had a habit of always following up on my first idea. And usually I would get about halfway through, and then think of something else that would have been really cool to do. And then I had to make the decision - do I scrap the current project and try and do the better idea at the risk of not having time to really complete it, or finish the first idea and be unsatisfied with it? It was really frustrating, but it taught me something important.

Your first instinct isn't always the right one.

Sometimes you have to sit and brainstorm. Sketch ideas out, talk to your instructor, bounce ideas off other classmates, hell, maybe even just sit there and do nothing but think. I've done my best to apply this to my sculpture class this semester. We've started on two projects so far, and on each one I've come up with three different ideas and really thought about it before I committed to one. So make sure that the idea you decide to pursue is really the one you want to do!

Oh an hey! Speaking of sculpture, I do believe I promised a picture of my current project! 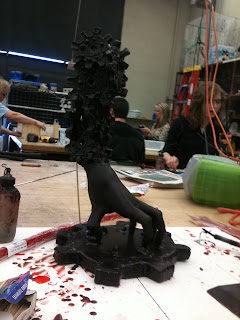 There it is, in all it's waxy glory! It looks a little different right now, because I've attached the gating system. It's a bunch of really thin red wax that's wrapped all around it like a bunch of tentacles, it looks pretty interesting. I'll post a pic if I get one before I start dipping it to make the mold. For those of you unfamiliar with this process, basically you make your sculpture in wax, attach the gating system (which is a series of funnels and vents to make sure the whole thing gets filled), you dip it in this stuff called slurry, which creates a shell, which after it is thick enough, you stick in the kiln which hardens it and melts out all of the wax, and then you pour molten metal (in my case, aluminum) into the mold. I'm going to mount my finished metal product on a box with a crank on the side so you can turn the whole thing around and it is going to be very neat.

Anywhos, that is that. You shall hear from once again once I think of another lesson! Or I am bored and feel like talking about random stuff! Or if I have something interesting post! Exclamation point!
Posted by Ian Johnson at 12:30 AM

Ian Johnson
Just an average art student sharing his experiences. You can email me at crazyartist@everestkc.net or you can see if I'm on aim, username: writer1337